Karnataka Higher Secondary Board has released notification of Second PUC Time Table 2016 . You can check date sheet of individual subjects for 2nd PUC exam schedule timetable and download the PDF document through KSEEB Board for your reference. The Class 12th examination is scheduled to start from March 10th for Science, Commerce and Arts stream candidates. You can check stream wise time table for more information.

Kindly look at the date sheet to be followed in next year’s exam: 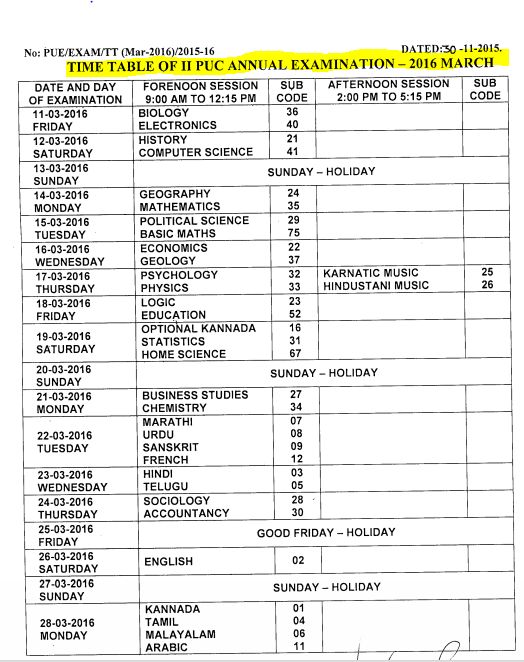 As you can see for science students, there is a five day gap from Chemistry exam to Maths exam. After that Physics is being conducted after 2 days of holiday gap. Computer science exam is being given 2 days gap followed by English language exam again being given 2 days for preparation.

How to prepare well and score full marks in 2nd PUC exam?

There’s only one answer we can give – Early preparation and constant practice. Try to finish your course as early as possible and start following previous year’s papers to get idea about pattern, type of question asked and importance of individual chapters in every subject.
If you are oing well, try solving few unsolved model test papers to judge how many questions you are cracking perfectly. This will give you a fair idea about where you stand where you start your exams in final stages. Click Here to Open Count Down
[powr-countdown-timer label=”Days For Exams”]